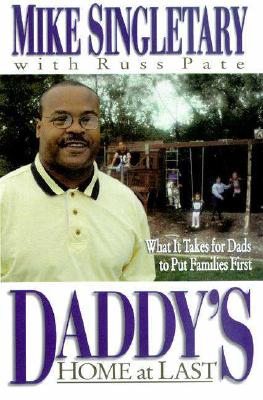 Daddy's Home at Last: What It Takes for Dads to Put Families First

The intensity, focus, and commitment that former All-Pro Linebacker Mike Singletary brought to the Chicago Bears are the same qualities that have made him a star player in the most important team of all -- his family. What is it that has driven Singletary to be the best father he can be, and why is he so concerned that other fathers learn to fill their role in their families with wisdom, perseverance, integrity, and love?

Perhaps it's because Singletary himself grew up without a dad. The product of a broken home, Mike knows just how important a father is to his children. In Daddy's Home at Last, Singletary speaks candidly about what it was like to grow up without a father's daily influence. And he tells of his own decision to put his family first in all his plans and decisions, and to be involved in all of his children's lives as they grow up.

Singletary insists that dads -- not televisions sets or computerized entertainment centers -- are the real role models in their children's lives. Fathers are needed at PTA meetings, soccer games, Scout outings, and church camps. Fathers are needed as rewarders, disciplinarians, and goal-setters. They're needed as encouragers and consolers, listeners and advisors, and as someone their children can share their joys, opportunities, and prayers with.

Rather than hiding behind the newspapers or hanging out with his buddies on the softball team, the American dad needs to find his closest friends at home, in his wife and children. Mike Singletary tells fathers how he found his place at home as a role model and teacher for his kids -- and how fathers everywhere can make the same choice with the same success.

Title: Daddy's Home at Last: What It Takes for Dads to Put Families First

Daddy's Home at Last: What It Takes for Dads to Put Families First