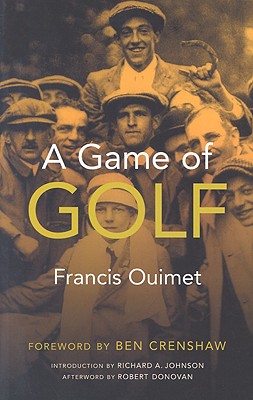 A Game of Golf (The Sportstown Series)

Francis Ouimet (1893-1967) was an awkward, relatively unknown twenty-year-old amateur and former caddy when he walked across the street from his modest home in Brookline, Massachusetts, and stunned the sports world by upsetting famed British golfers Harry Vardon and Ted Ray to win the 1913 U.S. Open in a dramatic playoff at The Country Club (TCC). His spectacular victory made him America's first golf hero, drew new fans to the sport, and forever altered the image of golf as a stuffy, rich man's game dominated by British and Scottish players. In this engaging memoir, first published in 1932, Ouimet fondly reminisces about his life in golf and gives sage advice on playing the game. With charm, wit, and a passion for the sport, he vividly chronicles his boyhood in Brookline, recalling how he scavenged for golf balls and clubs, learned to play on a homemade three-hole course in his backyard, and sometimes sneaked onto The Country Club's fairways to practice in the early morning hours. He recounts his caddying years, starting at age nine, the early amateur competitions, and the momentous 1913 U.S. Open tournament on his neighborhood course. Included is the legendary story of Ouimet turning down the offer of an experienced TCC member to carry his clubs in the playoff, sticking instead with his ten-year-old caddy, the self-assured Eddie Lowery. Ouimet's narrative then journeys through his illustrious amateur career, over the fairways of Hoylake, St. Andrews, Garden City, and Pebble Beach, and concludes with his great sentimental victory in the 1931 U.S. National Amateur at Beverly Hills in Chicago. Brimming with exciting matches and such great players as Bobby Jones and Walter Hagen, thesecolorful yet humble reminiscences of a working-class kid who changed the game of golf will appeal to golf enthusiasts and general readers alike.

Title: A Game of Golf (The Sportstown Series)

A Game of Golf (The Sportstown Series)