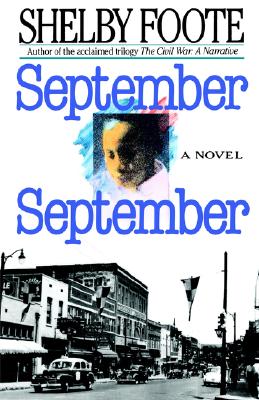 In September 1957 the South is mesmerized by events in Little Rock, Arkansas, whose governor has called out the National Guard as part of his attempt to halt the integration of Central High School. And in Memphis, two white men and a white woman are planning to capitalize on the confrontation between the races by kidnapping the grandson of a wealthy black entrepreneur and pinning the crime on white supremacists. The problem is that Podjo, Rufus, and Reeny have only an amateur's understanding of what a kidnapping entails -- and a total, terrifying incomprehension of their victims.

In September September a magisterial historian of the Civil War charts its distant repercussions in the streets of the contemporary South. By turns wryly comic, ribald, and chilling, Shelby Foote's novel is at once a convincing thriller and a powerful tragicomedy of race. September September has been adapted by Larry McMurtry for the Turner Network Television film Memphis, starring Cybill Shepherd.