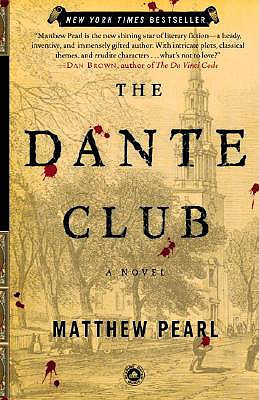 The Dante Club: A Novel

NEW YORK TIMES BESTSELLER - Before The Dante Chamber, there was The Dante Club "an ingenious thriller that . . . brings Dante Alighieri's Inferno to vivid, even unsettling life."--The Boston Globe

"With intricate plots, classical themes, and erudite characters . . . what's not to love?"--Dan Brown, author of The Da Vinci Code and Origin Boston, 1865. The literary geniuses of the Dante Club--poets and Harvard professors Henry Wadsworth Longfellow, Dr. Oliver Wendell Holmes, and James Russell Lowell, along with publisher J. T. Fields--are finishing America's first translation of The Divine Comedy. The powerful Boston Brahmins at Harvard College are fighting to keep Dante in obscurity, believing the infiltration of foreign superstitions to be as corrupting as the immigrants arriving at Boston Harbor. But as the members of the Dante Club fight to keep a sacred literary cause alive, their plans fall apart when a series of murders erupts through Boston and Cambridge. Only this small group of scholars realizes that the gruesome killings are modeled on the descriptions of Hell's punishments from Dante's Inferno. With the lives of the Boston elite and Dante's literary future in the New World at stake, the members of the Dante Club must find the killer before the authorities discover their secret. Praise for The Dante Club "Ingenious . . . Matthew Pearl] keeps this mystery sparkling with erudition."--Janet Maslin, The New York Times "Not just a page-turner but a beguiling look at the U.S. in an era when elites shaped the course of learning and publishing. With this story of the Dante Club's own descent into hell, Mr. Pearl's book will delight the Dante novice and expert alike."--The Wall Street Journal " Pearl] ably meshes the . . . literary analysis with a suspenseful plot and in the process humanizes the historical figures. . . . A divine mystery."--People (Page-turner of the Week) "An erudite and entertaining account of Dante's violent entrance into the American canon."--Los Angeles Times "A hell of a first novel . . . The Dante Club delivers in spades. . . . Pearl has crafted a work that maintains interest and drips with nineteenth-century atmospherics."--San Francisco Chronicle

Title: The Dante Club: A Novel

The Dante Club: A Novel