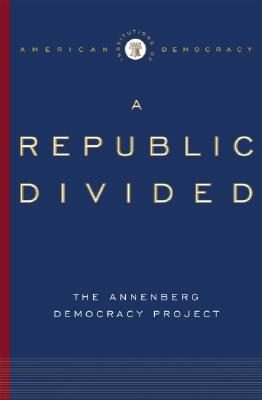 The Institutions of American Democracy series, published in partnership with the Annenberg Foundation Trust at Sunnylands and the Annenberg Public Policy Center (APPC), is designed to stimulate debate about the future of American democracy. Commissions of the nation's leading scholars as well as practitioners directly involved with each of these institutions gathered together to discuss the important issues being debated within each. Led by a stellar national advisory board, the first five volumes were published in late 2005 and focused on the executive branch, legislative branch, judicial branch, public schools, and the press.
This sixth volume in the series assesses the state of American democracy by taking a close look at how people see these five core institutions. Through an analysis of opinion surveys commissioned by the APPC, A Republic Divided compares the views of the general population with those of the insiders. Topics addressed include the separation of powers, trust, knowledge, effectiveness, and many other issues. In addition to chapters on each institution, there are also cross-institutional analyses on separation of powers and on trust and performance, including a discussion of the tensions that each institution has with the press. An appendix includes technical details about the surveys, and the book concludes with an index. All of the toplines and data sets for the surveys are available on the APPC Web site: www.annenbergpublicpolicycenter.org
This is a much needed report on the state of American democracy during a time of deep political and cultural division. It is the perfect final volume for this important series.