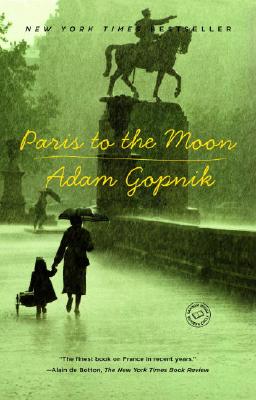 Paris to the Moon

Paris. The name alone conjures images of chestnut-lined boulevards, sidewalk caf s, breathtaking fa ades around every corner--in short, an exquisite romanticism that has captured the American imagination for as long as there have been Americans.

In 1995, Adam Gopnik, his wife, and their infant son left the familiar comforts and hassles of New York City for the urbane glamour of the City of Light. Gopnik is a longtime New Yorker writer, and the magazine has sent its writers to Paris for decades--but his was above all a personal pilgrimage to the place that had for so long been the undisputed capital of everything cultural and beautiful. It was also the opportunity to raise a child who would know what it was to romp in the Luxembourg Gardens, to enjoy a croque monsieur in a Left Bank caf --a child (and perhaps a father, too) who would have a grasp of that Parisian sense of style we Americans find so elusive. So, in the grand tradition of the American abroad, Gopnik walked the paths of the Tuileries, enjoyed philosophical discussions at his local bistro, wrote as violet twilight fell on the arrondissements. Of course, as readers of Gopnik's beloved and award-winning "Paris Journals" in The New Yorker know, there was also the matter of raising a child and carrying on with day-to-day, not-so-fabled life. Evenings with French intellectuals preceded middle-of-the-night baby feedings; afternoons were filled with trips to the Mus e d'Orsay and pinball games; weekday leftovers were eaten while three-star chefs debated a "culinary crisis." As Gopnik describes in this funny and tender book, the dual processes of navigating a foreign city and becoming a parent are not completely dissimilar journeys--both hold new routines, new languages, a new set of rules by which everyday life is lived. With singular wit and insight, Gopnik weaves the magical with the mundane in a wholly delightful, often hilarious look at what it was to be an American family man in Paris at the end of the twentieth century. "We went to Paris for a sentimental reeducation-I did anyway-even though the sentiments we were instructed in were not the ones we were expecting to learn, which I believe is why they call it an education."

Title: Paris to the Moon

Paris to the Moon