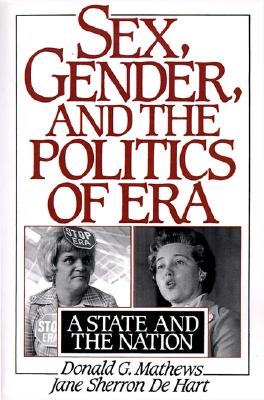 Sex, Gender, and the Politics of ERA: A State and the Nation

Sex, Gender, and the Politics of ERA is the most profound and sensitive discussion to date of the way in which women responded to feminism. Drawing on extensive research and interviews, Mathews and De Hart explore the fate of the ERA in North Carolina--one of the three states targeted by both sides as essential to ratification--to reveal the dynamics that stunned supporters across America. The authors insightfully link public discourse and private feelings, placing arguments used throughout the nation in the personal contexts of women who pleaded their cases for and against equality. Beginning with a study of woman suffrage, the book shows how issues of sex, gender, race, and power remained potent weapons on the ERA battlefield. The ideas of such vocal opponents as Phyllis Schlafly and Senator Sam Ervin set the perfect stage for mothers to confess their terror at the violation of their daughters in a post-ERA world, while the prospect of losing ratification to this terror impelled supporters to shed the white gloves of genteel lobbying for the combat boots of political in-fighting. In the end, the efforts of ERA supporters could neither outweigh the symbolic actions of its opponents nor weaken the resistance of those same legislators to further federal guarantees of equality. Ultimately, opponents succeeded in making equality for women seem dangerous. In thus explaining the ERA controversy, the authors brilliantly illuminate the many meanings of feminism for the American people.

Title: Sex, Gender, and the Politics of ERA: A State and the Nation

Sex, Gender, and the Politics of ERA: A State and the Nation