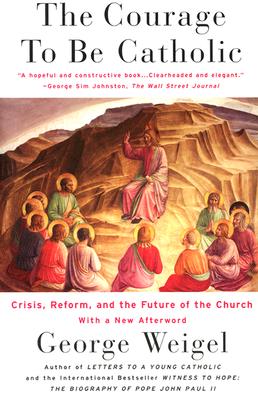 The Courage to Be Catholic: Crisis, Reform and the Future of the Church

When sexual scandals rocked the American Catholic Church, many observers and faithful alike called on the church to abandon its tenets on the vocation of the priesthood and sexuality outside marriage-to, in effect, become more Protestant. Acclaimed theologian and best-selling author George Weigel saw the crisis differently: as a crisis of fidelity to the true essence of Catholicism. In this well-reviewed book that touched a chord with so many practicing Catholics, Weigel examines the scandal in the context of church history, and exposes the patterns of dissent and self-deception that became entrenched in seminaries, among priests, and ultimately among the bishops who failed their flock by thinking like managers instead of apostles.But, Weigel reminds us, in the Biblical world a "crisis" is also a time of great opportunity, an invitation to deeper faith. With honesty and critical rigor, Weigel sets forth an agenda for genuine reform that challenges clergy and laity alike to lead more integrally Catholic lives. More than just a response to recent failures, The Courage to Be Catholic is a bracing, forward-looking call to action, and a passionate embrace of life lived in faith.

Title: The Courage to Be Catholic: Crisis, Reform and the Future of the Church

The Courage to Be Catholic: Crisis, Reform and the Future of the Church