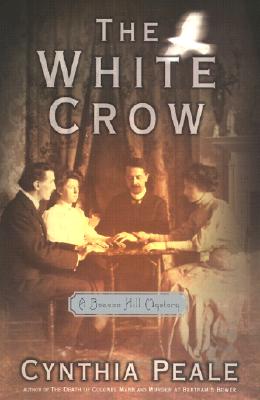 Amateur sleuths Caroline and Addington Ames venture to "the other side"-the world of restless and vengeful spirits-to solve some very real flesh-and-blood crimes in Victorian Boston in the third volume of Cynthia Peale's acclaimed Beacon Hill mystery series.
When Caroline Ames makes the daring decision to visit a medium, she keeps it a secret from her older brother, Addington. Ever the rationalist, Addington has made his disapproval of Boston society's recent infatuation with spiritualists quite clear. Fervently
hoping to contact their mother, Caroline has asked Dr. McKenzie, the Ameses' boarder and dear friend, to accompany her to a
seance held by Mrs. Sidgwick, reputed to be the best medium in Boston. Mrs. Sidgwick's powers prove to be quite amazing: Although she is unable to reach Mrs. Ames, she miraculously fulfills the expectations of others attending the seance. Among them is Theophilus Clay, a well-known and much-beloved philanthropist who receives a message from his late wife-and is immediately struck dead right in Mrs. Sidgwick's parlor. The police quickly determine that Clay's death was not the result of a heart attack brought on by excitement, but cold-blooded murder. At the request of an old friend of his father's, Addington agrees to help clear Mrs. Sidgwick's name. Despite his certainty that all mediums are charlatans, Addington is badly shaken when Mrs. Sidgwick receives the ominous message "Ames next" and Caroline is pushed in the path of a horse and narrowly escapes death. Addington's conversation with William James at Harvard does little to reassure him. In James's learned opinion, "Even if there were no other medium in the world who had her powers, shealone proves that such powers exist. I put it this way: If you seek to prove that all crows are not black, you need only one white crow. And Mrs. Sidgwick is my white crow." But Addington needs more solid proof before he is willing to accept that Mrs. Sidgwick's connections to Clay's murder and Caroline's near-fatal accident defy rational explanation.
Like the previous books in the Beacon Hill series, "The White Crow "perfectly captures the atmosphere of Victorian Boston and uncovers the dark secrets harbored by some of its respectable citizens. Cynthia Peale's many fans are in for a double treat in this volume: Interwoven in the intriguing tale of murder and deception is the delightful story of the love that blossoms between Caroline and Dr. McKenzie.