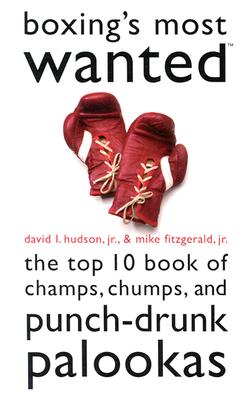 Boxing's Most Wanted: The Top 10 Book of Champs, Chumps, and Punch-Drunk Palookas (Most Wanted)

The Most Wanted series puts on the gloves and steps inside the squared circle to chronicle the best and worst of the pugilistic world plus everything in between. Authors David L. Hudson, Jr., and Mike Fitzgerald, Jr., answer the bell with fifty top-ten lists of famous fighters, fantastic finishes, oddball occurrences, and yes, even the punch-drunk palookas that padded the stats of some of the sport s top stars. You ll read about the greatest fight trilogies, the biggest upsets, the famous families, and the real-life boxing personalities who appeared in the movie reels. You ll even read dueling lists about boxers with prison backgrounds and those who had a second career on the right side of the law. Which all-time middleweight great, who set a record with fifteen successive title defenses, lost his debut bout at the light-heavyweight level? Whom did Muhammad Ali dub "Dracula" because of his missing front teeth? Which prolific puncher scared some opponents so badly that after they showed up at the weigh-in, they chickened out of the fight itself? You ll find these tidbits and hundreds of others in "Boxing's Most Wanted ." Whether you re a new fan or a longtime student of the sport, you ll find something in this book to amuse and amaze you. You don t have to skip rope or chug raw eggs to get inside a boxing ring anymore, Hudson and Fitzgerald take you there to absorb all the jabs, roundhouses, and kayoes you can handle."

Title: Boxing's Most Wanted: The Top 10 Book of Champs, Chumps, and Punch-Drunk Palookas (Most Wanted)

Boxing's Most Wanted: The Top 10 Book of Champs, Chumps, and Punch-Drunk Palookas (Most Wanted)