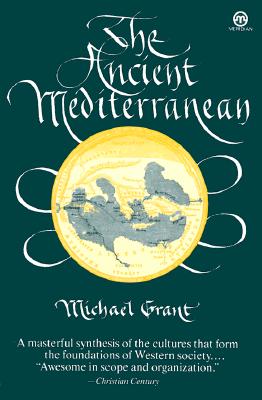 Written by eminent classical scholar Michael Grant. The Ancient Mediterranean is a wonderfully revealing, unusually comprehensive history of all the peoples who lived around the Mediterranean from about 15,000 B.C. to the time of Constantine (306-337 A.D.). Many volumes, including Professor Grant's own previous works, trace the histories of the great civilizations of Greece and Rome. But this unique work looks at the influences and cultures of the entire region, including Egypt, Israel, Crete, Carthage, Ionia and the Eastern colonies. Syria, and the Etruscans, as well as the Greek and Roman states.

Drawing on archaeology, geography, anthropology, and economics. Professor Grant shows how the great Oriental civilizations--Egypt, Assyria, Babylonia, Persia--originated attitudes and institutions ultimately passed on to the West. He describes the effect on the people and their achievements of the long, irregular coastline, the mountainous terrain surrounding small fertile plains, the typical plant life of olive and grape, and the rapidly changing weather. Further, he investigates how the demographic factors around this deep and stormy sea caused or influenced the great periods of ancient history, such as that of fifth-century Athens and of Rome in the first century A.D. Appealing and fascinating reading, this impeccably researched history brings a fresh perspective to understanding our ancient heritage.