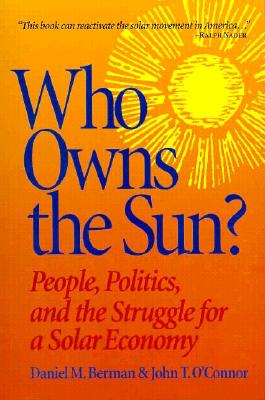 Who Owns the Sun?: People, Politics, and the Struggle for a Solar Economy

In Who Owns the Sun? Daniel Berman and John O'Connor argue that democratic control of solar energy is the key to revitalizing America -- putting power back into the hands of local people. A decentralized solar economy will bring thousands of new jobs to local communities that would no longer be exporting millions of energy dollars every year to transnational corporations and oil cartels.In an era when the rules of the energy game are changing -- as legislatures and public utility commissions experiment with retail wheeling and other forms of deregulation -- citizens need to create new ways to govern energy to avoid becoming sharecroppers of the sun that rightfully belongs to everyone.

Title: Who Owns the Sun?: People, Politics, and the Struggle for a Solar Economy

Who Owns the Sun?: People, Politics, and the Struggle for a Solar Economy