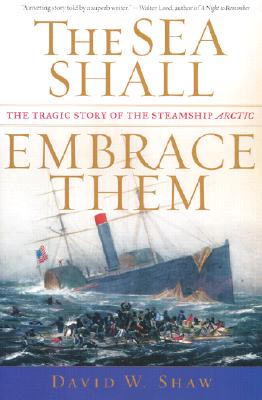 The Sea Shall Embrace Them: The Tragic Story of the Steamship Arctic

The 1854 collision at sea between the Arctic and the Vesta, a much smaller French steamship, set in motion one of the most harrowing events in maritime history, with enormous and tragic consequences. David W. Shaw, who brings decades of experience as a seaman to his writing, has based this riveting tale on the firsthand testimony of the few who survived the wreck, including its heroic captain, James C. Luce.

It is the story of the brave and dutiful Luce fighting his mutinous crew as they take the lifeboats, leaving hundreds of men, women, and children to suffer a cruel and painful death. It is also the story of those who survived the frigid waters and those who perished -- including Luce's own frail son, who died as the grief-stricken captain helplessly watched. Not only did 400 people die by daybreak, the wreck brought to an end the domination of the seas by the American maritime fleet.

Utterly compelling, beautifully written, and a fascinating, heretofore little-known slice of American history, "The Sea Shall Embrace Them" is a stirring narrative that puts the reader on the deck as a shipful of men, women, and children do battle both with a mighty ocean and with their own baser instincts to survive.

Title: The Sea Shall Embrace Them: The Tragic Story of the Steamship Arctic

The Sea Shall Embrace Them: The Tragic Story of the Steamship Arctic