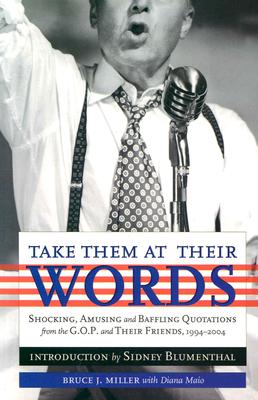 Take Them at Their Words: Startling, Amusing and Baffling Quotations from the GOP and Their Friends, 1994-2004

In the Wake of the Republican Revolution of 1994, when the G.O.P. won majority status in the U.S. House of Representatives and House Speaker Newt Gingrich's "Contract With America made best-seller lists, Bruce J. Miller began collecting the verbal and rhetorical gems of freshman Republicans and their many friends in the media--as well as a smattering of oddities from the other end of the political spectrum. "Take Them At Their Words is an amusing, shocking and revealing compendium of quotes taken from a wide variety of sources such as the "Congressional Record, radio and television, newspapers, books, magazines and websites. The quotes are grouped under headings like "Earth day at the G.O.P." and "Love Thy Neighbor." Twelve contemporary political cartoons are also included. Here are a few samples: " Sarah Brady] ought to be put down. A humane shot at a veterinarian's would be an easy way to do it. I wish she would just keep wheeling her husband around, wiping the saliva off his mouth once in a while--and leave the rest of us damn well alone." "Bob Mohan, talk radio host from Phoenix, Arizona, speaking on station KFYI about gun control activists Sarah and James Brady, 4-29-95. "If I was still in office I would be raping and pillaging throughout the intelligence community to get to the bottom of this." "Then-retired Joint Chiefs of Staff Chairman Colin Powell, testifying before the Senate Veterans' Affairs Committee about the exposure of U.S. troops to chemical weapons during the Persian Gulf War, 4-18-97. ." . . Now depending on your circumstances and the nature of the attack, you might do better by staying put. Or it might be better to get away. You should understand and plan for bothpossibilities. Think about fresh water, food, and clean air." "From a voice recording of Tom Ridge at the Dept of Homeland Security, 1-800-BE-READY, 4-9-03.

Title: Take Them at Their Words: Startling, Amusing and Baffling Quotations from the GOP and Their Friends, 1994-2004

Take Them at Their Words: Startling, Amusing and Baffling Quotations from the GOP and Their Friends, 1994-2004