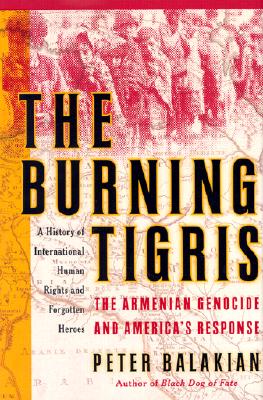 Burning Tigris, The: The Armenian Genocide and America's Response

Awarded the Raphael Lemkin Prize for the best scholarly book on genocide by the Institute for Genocide Studies at John Jay College of Criminal Justice/CUNY Graduate Center.

In this groundbreaking history of the Armenian Genocide, the critically acclaimed author of the memoir Black Dog of Fate brings us a riveting narrative of the massacres of the Armenians in the 1890s and genocide in 1915 at the hands of the Ottoman Turks. Using rarely seen archival documents and remarkable first-person accounts, Peter Balakian presents the chilling history of how the Young Turk government implemented the first modern genocide behind the cover of World War I. And in the telling, he also resurrects an extraordinary lost chapter of American history.

During the United States' ascension in the global arena at the turn of the twentieth century, America's humanitarian movement for Armenia was an important part of the rising nation's first epoch of internationalism. Intellectuals, politicians, diplomats, religious leaders, and ordinary citizens came together to try to save the Armenians. The Burning Tigris reconstructs this landmark American cause that was spearheaded by the passionate commitments and commentaries of a remarkable cast of public figures, including Julia Ward Howe, Clara Barton, Theodore Roosevelt, Woodrow Wilson, Ambassador Henry Morgenthau, Charlotte Perkins Gilman, Alice Stone Blackwell, Stephen Crane, and Ezra Pound, as well as courageous missionaries, diplomats, and relief workers who recorded their eyewitness accounts and often risked their lives in the killing fields of Armenia.

The crisis of the "starving Armenians" was so embedded in American popular culture that, in an age when a loaf of bread cost a nickel, the American people sent more than $100 million in aid through the American Committee on Armenian Atrocities and its successor, Near East Relief. In 1915 alone, the New York Times published 145 articles about the Armenian Genocide.

Theodore Roosevelt called the extermination of the Armenians "the greatest crime of the war." But in the turmoil following World War I, it was a crime that went largely unpunished. In depicting the 1919 Ottoman court-martial trials, Balakian reveals the perpetrators of the Armenian Genocide confessing their guilt -- an astonishing fact given the Turkish government's continued denial of the Genocide.

After World War I, U.S. oil interests in the Middle East steered America away from the course it had pursued for four decades. As Balakian eloquently points out, America's struggle between human rights and national self-interest -- a pattern that would be repeated again and again -- resonates powerfully today. In crucial ways, America's involvement with the Armenian Genocide is a paradigm for the modern age.

Title: Burning Tigris, The: The Armenian Genocide and America's Response

Burning Tigris, The: The Armenian Genocide and America's Response