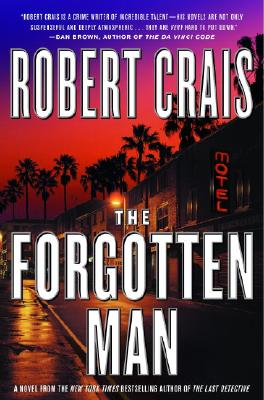 The Forgotten Man : A Novel

In his major "New York Times" bestseller, "The Last Detective," Robert Crais returned to his signature characters, private investigator Elvis Cole and his enigmatic partner, Joe Pike. Now Crais delivers a stunning, edge-of-your-seat suspense novel that leads Elvis to the very thing he's always searched for-- the dark secrets of his own life--as well as a brutal killer determined to stop him."
"Los Angeles, 3:58 a.m.: Elvis Cole receives the phone call he's been waiting for since childhood. Responding to a gunshot, the LAPD has found an injured man in an alleyway. He has told the officer on the scene that he is looking for his son, Elvis Cole. Minutes later, the man is dead.
Haunted throughout his life by a lack of knowledge about his father, Elvis turns to the one person who can help him navigate the minefield of his past-- his longtime partner and confidant, Joe Pike. Together with hard-edged LAPD detective, Carol Starkey, they launch a feverish search for the dead man's identity--even as Elvis struggles between wanting to believe he's found his father at last and allowing his suspicions to hold him back. With each long-buried clue they unearth, a frightening picture begins to emerge about who the dead man might have been and the terrible secret he's been guarding.
At the same time, Elvis has no way of knowing he has awakened a sleeping monster. The further he goes in his investigation, the closer he draws to a merciless killer who is violently connected to the unidentified man's past. This psychopath believes Cole is hunting him, and he goes on the attack to find Elvis before Elvis can find him.
Summoning all the powerful elements that have made Robert Crais one of thepreeminent crime writers today, "The Forgotten Man" is a spectacular tour-de-force of suspense and intrigue.

Title: The Forgotten Man : A Novel

The Forgotten Man : A Novel