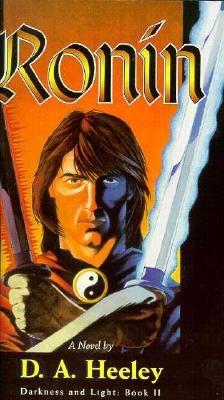 Follow the continuing exploits of Malak, the Adept and warrior of the Light, in the battle against his eternal foes, in "Ronin" by D. A. Heeley.
Malak's battle began in the book "Lilith." He and his allies lost the battle for the Tree of Life. Now, while the universe has sunk to its lowest level ever, it is time to strike back.
"Ronin" takes place a thousand years after the events in the previous book. Malak and his allies are reborn to their world. Even so, the echoes of their former lives still shake the astral plane--but the time has come for a change.
In "Ronin," the plane of Enya has become a hellish place, teeming with dark creatures drawn by Lilith's evil. The worst foe for Malak to face is Dethen, who is his mortal foe, his nemesis, and his karmic twin.
Soon it becomes apparent that the fate of the Tree of Life revolves around Malak, now a "ronin" samurai-magician who has lost his master. Unlike any other "ronin," Malak has lost his very soul.
Lena is the love of Malak's many lives. They have been born together innumerable times. Now, only she can save Malak from despair and fuse the shattered pieces of his identity with her love and magic. She must do this quickly, for already Dethen's inner demons are goading him to destroy Malak utterly.
Can Lena succeed? If Malak can reunite his soul, can he find a way to defeat the sinister might of Dethen? If he can defeat Dethen, can he stand before Lilith's awesome power in a final terrifying confrontation?
Only by reforging the broken link to his Higher Self can Malak put right the wrong he did when he released the Arch-Demon into Enya long ago. Only through spiritual rebirth, can he regain his Adepthood and his own vanquished soul.
In "Ronin" you will discover an exciting story (which won an award from the Coalition of Visionary Retailers for Fiction) as you learn about the nature of magic. In fact, included is an essay on the nature of magic, as well as a glossary of terms that you may not know. Get "Ronin" today.