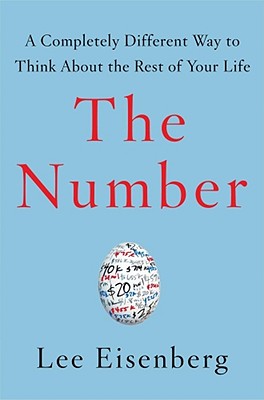 The Number : A Completely Different Way to Think About the Rest of Your Life

Do you know your Number?

What happens if you don't make it to your Number?

Do you have a plan?

The often-avoided, anxiety-riddled discussion about financial planning for a secure and fulfilling future has been given a new starting point in "The Number" by Lee Eisenberg. The buzz of professionals and financial industry insiders everywhere, the Number represents the amount of money and resources people will need to enjoy the active life they desire, especially post-career. Backed by imaginative reporting and insights, Eisenberg urges people to assume control and responsibility for their standard of living, and take greater aim on their long-term aspirations.

In 1999, Eisenberg was in the midst of downshifting from having served as the Editor-in-Chief of Esquire and other high profile positions. He was "half-in, half-out of the workplace" with an enviable consulting position at Time, Inc., and a family comfortably settled in the suburbs. That's when he received an unexpected offer from the Wisconsin-based Lands' End which, in the end, he couldn't resist. It meant uprooting his family and moving to the rural heartland, and taking on the challenges of an entirely new way of life. Before the move, he admits, "I was worried about the Number." Once in Wisconsin, Eisenberg confesses that the "Number was leading us around by our noses."

From Wall Street to Main Street USA, The Number means different things to different people. It is constantly fluctuating in people's minds and bank accounts. To some, the Number symbolizes freedom, validation of career success, the ticket to luxurious indulgences and spiritual exploration; to others, it represents the bewildering and nonsensical nightmare of an impoverished existence creeping up on them in their old age, a seemingly hopeless inevitability that they would rather simply ignore than confront. People are highly private and closed-mouthed when it comes to discussing their Numbers, or lack thereof, for fear they might either reveal too much or display ineptitude.

In "The Number, " Eisenberg describes this secret anxiety as the "Last Taboo," a conundrum snared in confusing financial lingo. He sorts through the fancy jargon and translates the Number into commonsense advice that resonates just as easily with the aging gods and goddesses of corporate boardrooms as it does with ordinary people who are beginning to realize that retirement is now just a couple of decades away. Believing that the Number is as much about self-worth as it is net worth, Eisenberg strives to help readers better understand and more efficiently manage all aspects of their life, money, and pursuit of happiness.

* According to Eisenberg, "Number chasers" fall into four personality types:

--"Procrastinators" enter their forties and fifties ensconced in a cloud of avoidance and denial about the years ahead of them, or simply do not understand investing in their futures.

--"Pluckers" often lazily or arrogantly pull ephemeral, albeit specific, Numbers from thin air with little attention to developing a realistic and coherent plan to achieve their goals.

--"Plotters" crunch every practical aspect of their financial history, hoping to cement their Number in black and white, even at the expense of not having fun and leisure.

--"Probers" visualize their Numbers not as an end but as the means to pursuing dreams and passions, and completing inner and outer journeys to self-fulfillment.

* The current "Debt Warp" is the "silent Number killer that afflicts young and old" that has been brought on by our "whip-it-out credit-card culture."

* The "Lost Years" describes a person's 20s, 30s, and 40s wherein sensible financial foundation-building bows to oblivious and careless spending, and the tug-of-war dichotomy between the "old Rest of Your Life" and the "new Rest of Your Life."

* A surprise "Lifestyle Relapse" attack around retirement age can be induced by debt, aging, long term care, and self-absorption. Living longer and spending more, people will eventually experience dire consequences in response to the debt-drenched, expense account-driven lifestyles to which they have grown accustomed.

* The six tenets of the "Eisenberg Uncertainty Principles" outline the dubious state of living in a carpe diem-addicted, indebted culture with little financial guidance or responsibility.

* "Downshifting" is an important skill one needs to know how to do in the expanse between leaving a career and before death in order to maintain financial stability and a happy life.

Eisenberg's book is not an investment guide, but rather something wholly original: a revealing look behind our most common financial and emotional conflicts and how we can begin to get a grip on them. Eisenberg gives each reader a unique and unprecedented tool with which to virtually craft his or her future. This encompassing book is a priceless, step-by-step prelude to initiating, or continuing, discussions with a qualified financial advisor. The bottom line for "The Number" is that Eisenberg offers each reader a fresh and promising beginning to the rest of his or her life.

Title: The Number : A Completely Different Way to Think About the Rest of Your Life

The Number : A Completely Different Way to Think About the Rest of Your Life