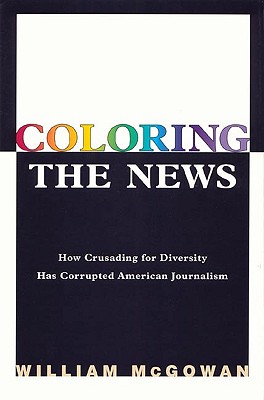 Coloring the News: How Political Correctness Has Corrupted American Journalism

William McGowan opens the door to the newsrooms at 'USA Today', the 'New York Times', the 'Washington Post' and other pillars of the 'mainstream press' in this carefully researched investigation of how the quest for 'diversity' has affected American journalism. Focusing on coverage of the 'diversity issues' of immigration, race, gay rights, feminism and affirmative action, McGowan gives a fascinating analysis of what stories get reported and how. Along the way, he dissects the way the press 'mis-told' key stories involving figures like Kara Hultgren (the Navy fighter pilot who died after missing a carrier landing), Kelly Flinn (the Air Force officer cashiered for an affair with a married man) and Patrick Chavis (the black physician who was once a poster boy for affirmative action and then had his license taken away because of medical incompetence). This is an impressively documented and provocative book about how a journalism slanted by good intentions has allowed a narrow multicultural orthodoxy to restrict debate just at the point when information about America's changing national identity needs to be robust, knowledgeable and honest.

Coloring the News: How Political Correctness Has Corrupted American Journalism