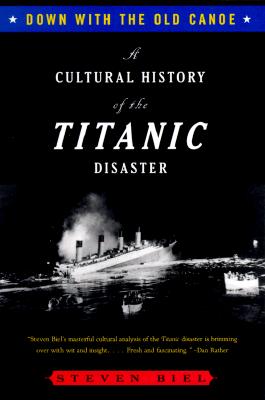 Down with the Old Canoe: A Cultural History of the Titanic Disaster

"I suggest, henceforth, when a woman talks women's rights, she be answered with the word Titanic, nothing more just Titanic," wrote a St. Louis man to the St. Louis Post-Dispatch. He was not alone in mining the ship for a metaphor. Everyone found ammunition in the Titanic suffragists and their opponents; radicals, reformers, and capitalists; critics of technology and modern life; racists and xenophobes and champions of racial and ethnic equality; editorial writers and folk singers, preachers and poets. Protestant sermons used the Titanic to condemn the budding consumer society ("We know the end of . . . the undisturbed sensualists. As they sail the sea of life we know absolutely that their ship will meet disaster."). African American toasts and working-class ballads made the ship emblematic of the foolishness of white people and the greed of the rich. A 1950s revival framed the disaster as an "older kind of disaster in which people had time to die." An ever-increasing number of Titanic buffs find heroism and order in the tale. Still in the headlines ("Titanic Baby Found Alive " the Weekly World News declares) and a figure of everyday speech ("rearranging deck chairs . . ."), the Titanic disaster echoes within a richly diverse, paradoxical, and fascinating America.

Title: Down with the Old Canoe: A Cultural History of the Titanic Disaster

Down with the Old Canoe: A Cultural History of the Titanic Disaster