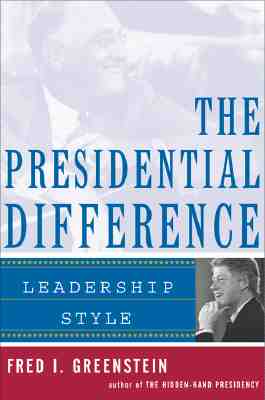 The Presidential Difference: Leadership Style from Roosevelt to Clinton

By: Fred I. Greenstein

As Americans choose and install a new president for a new century they could do no better than to read this work by one of our keenest observers of the modern presidency. Drawing on a quarter-century's immersion in the presidential record and scores of interviews, Fred I. Greenstein provides a fascinating and instructive account of the qualities that have served well and poorly in the Oval Office from Franklin D. Roosevelt's first hundred days to the end of the Clinton administration.

Greenstein offers a series of bottom-line judgments on each of his eleven subjects and a bold new explanation of why presidents succeed or fail. Previous analysts have placed their bets on the president's political prowess or personal character. Yet by the first standard, LBJ should have been our greatest president, and by the second the nod would go to Jimmy Carter. Greenstein surveys each president's record in public communication, political skill, vision, cognitive style, and emotional intelligence. He concludes that the last is by far the most important.

According to Greenstein, FDR provides endless positive lessons but is a source of warnings. Truman let his bizarre readings of history lead him astray. Eisenhower was wise but failed to communicate a vision. Kennedy had no vision. Reagan was Carter in reverse. It is Ford who is most unappreciated and genuinely interesting. Ford balanced many conflicting demands, kept his poise, and left the office much stronger than he found it.

Presidents can avoid failure if they are willing to accept the warnings of failures past and act accordingly. But it is not only presidents who should read this book with care. Some flaws cannot be overcome nomatter how otherwise talented the man. Only three of Greenstein's eleven modern presidents were "fundamentally free of distracting emotional perturbations." When we choose our presidents, we will do well to listen to Greenstein and "Beware the presidential contender who lacks emotional intelligence. In its absence all else may turn to ashes."

Title: The Presidential Difference: Leadership Style from Roosevelt to Clinton

The Presidential Difference: Leadership Style from Roosevelt to Clinton