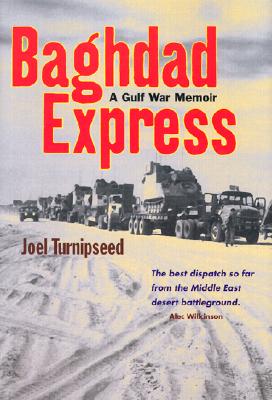 In early summer of 1990, Joel Turnipseed was homeless--kicked out of his college's philosophy program, dumped by his girlfriend. He had been AWOL from his Marine Corps Reserve unit for more than three months, spending his days hanging out in coffee shops reading Plato and Thoreau.

Turnipseed's unit was activated for service in Operation Desert Shield. By January of '91, he was in Saudi Arabia driving tractor-trailers for the Sixth Motor Transport Battalion--the legendary "Baghdad Express." The greatest logistical operation in Marine Corps history, the Baghdad Express hauled truckloads of explosives and ammunition across hundreds of miles of desert. But on the brink of war, Turnipseed's greatest struggles are still within. Armed with an M-16 and a seabag full of philosophy books, he is a wise-ass misfit, an ironic observer with a keen eye for vivid detail, a rebellious Marine alive to the moral ambiguity of his life and his situation.

Developed from Turnipseed's 1997 feature article for GQ Magazine, this innovative memoir--simultaneously terrifying and hilarious, equal parts Catch-22 and Catcher in the Rye--explores both the absurdities of war and the necessity of accepting our flawed world of shadows. With expansive humanity and profane grace, Turnipseed finds the real-world answers to his philosophical questions and reaches the hardest peace for any young man to achieve--with himself.